In the past 10 days, I’ve spent countless hours on the various types of SBB train in Switzerland. Traveling from villages to cities to the top of the Swiss Alps. Switzerland has many different train routes.

To date, I’ve only traveled on the train once in Canada. Though I’ve traveled on trains in India, Turkey, Japan, Vietnam, Peru, Tibet, Western Europe and Central Europe. Train travel can be time efficient though a bit more costly. In Switzerland there’s no long distance buses, so unless I rent a car and share it with a few people – it’s not cost effective as a solo traveler.

However, I must say I’m quite impressed by the various types of trains used on the various routes in Switzerland. Some trains are noticeably purpose driven in their design while others purely serves the purpose to commute passengers from point A to point B.

I cannot call myself a true Trainspotter,  but there’s much that have amused my curiosity while traveling. Without getting into technicalities I’d like to share some of my observations.

The train to the top of Mt Rigi from Arth-Goldau is a mix of old and semi-new. It was really fun to sit in the old wooden carriage. The extra surprise was when the ticket master hung onto the the outside of the carriage as he checked our tickets. 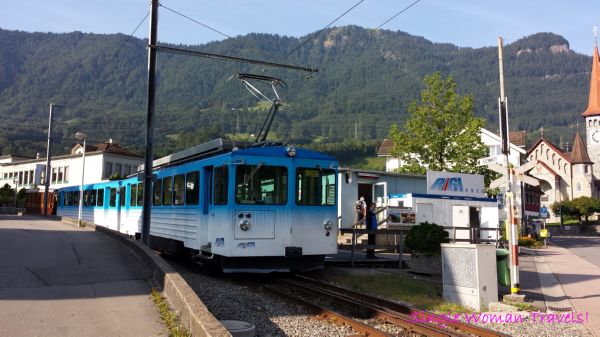 Checking for train tickets from outside the wooden carriage

The train that runs between Zermatt and Visp seems to be very new and very well designed for tourists and outdoor sport enthusiasts. It’s even equipped with a handicap accessible facilities. 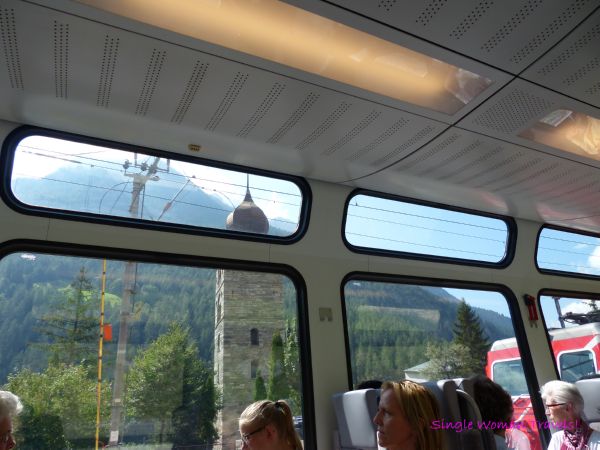 SBB train designed for touristic needs between Zermatt and Visp

SBB train between Visp and Zermatt

Facilities inside SBB train between Visp and Zermatt

This one train I took between Lucerne and Zürich even has a playground with a slide inside for children!

Playground inside SBB train between Zurich and Lucerne

As for value, it’s best to look at the route map from SBB and decide where you want to visit in Switzerland. If you want to pick one cheap place as your home base and make day trips it is possible as long as you don’t mind long days.

Single tickets adds up fast. The Swiss Pass and the Swiss Flexi Pass can help save you money. Then there’s the Swiss Half Fare card for 120 francs which entitles the pass holder to half fare on defined routes. (Remember to read all the fine prints!!)

I did not plan ahead as I did not know I would visit my high school friend who now lives in Switzerland. I got lucky and had a ticket agent spend over an hour with me to help me decide which ticket saves me the most money. In the end, I bought a 4-day Swiss Flexi Pass which allowed me 4 days of train travel within a 30 day period. The pass included free entry to certain museums and urban city transports in most of the major cities.

The ride to Jungfrau (highest summit in Europe) is very expensive and there’s not much to do once at the top. The other mountains offer hiking trails and activities to do. That’s why I chose not to visit Jungfrau on this trip and instead went to Mt Rigi (Lucerne area) and Gornergrat (view of Matterhorn).

I kept my plans loose and changed intended plans as I saw Switzerland from the window of the train. For example, Renens VD station was my home base, it’s located in the South West corner of Switzerland, close to Geneva. On the day where Grindelwald, with potential view of Jungfrau, as my main goal of the day – I ended up making short visits to Interlaken West, Thun (castle) and Bern; in addition to Grindelwald. The Swiss Flexi Pass allowed me to hop on and hop off as I saw fit. I just have to look at the big yellow Departures schedule that’s posted in all stations and remember the times.

NB: There is no WiFi on the trains. Some SBB stations offer free WiFi service, however, it requires a Swiss phone number.

Some days I keep to the plan.

Some days are totally random and spontaneous.

That’s one of the best beauty of solo travel.