The Red and White palace of Potala Palace

In the midst of the 2008 travel ban to Tibet, I signed up for a tour to Nepal and Tibet. Back then in 2008, I was buried by work, no time to research my travel logistics nor my destinations. I would pick up brochures and find somewhere far, far away from my cubicle in Toronto, Canada. I submitted my request for 4 weeks vacation in February 2008 to ensure work will be scheduled around my “escape time”.

I booked 2 overland tours back-to-back; India to Nepal and Nepal to Tibet. Now that I look back, it seemed as though I was on a Hindu / Buddhism pilgrimage.

For some travelers, they may have canceled this trip before departure. Days before my arrival on Oct 2 2008 in India, Delhi was rocked by 2 deadly bomb explosions in September 2008. While traveling within Nepal, a series of protests stopped traffic and we witnessed their anger from our tour bus. As the border to Tibet was closed for most of 2008, it was a gamble to see if our travel visa would be approved. Unlike the tour group before us who had to cancel their journey, we received our visa for Tibet a day after the intended date.

You may say, I was stupid, silly or plain stubborn. However, at times of pure uncertainty – if we do not persevere, we would forever live in state of “What if?!” As I see the bombings in Delhi, in the times right after a bombing, that is when it is safest. Everyone is on a heightened awareness, police and security systems are all on high alert. Protests happens everyday in my own backyard in Canada and many other countries. Some are definitely more violent than others, however, everyone deserves to be heard.

When I finally arrived in Tibet, I was extremely happy to have had the privilege to experience and witness the beauty it has to offer. 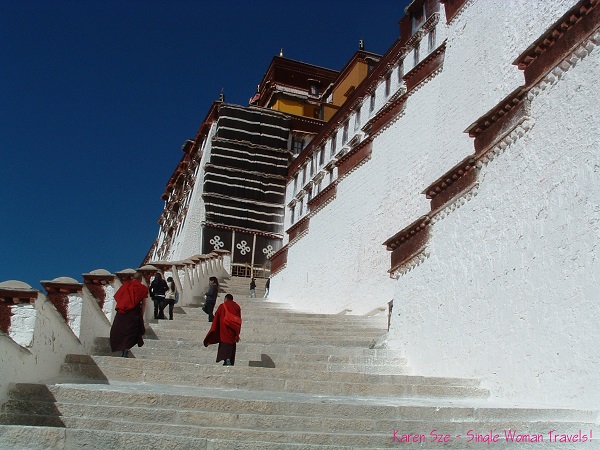 Tibetan monks walking up the stairs to Potala Palace

After viewing the Potala Palace from afar and up close and walking down the halls inside the immense structure, I kept wondering how Old Lhasa used to look like before the “Liberation Army” came and destroy much of the city and country.

Walking in the streets of Lhasa allowed me to witness the true devotion held by young and old Tibetan Buddhists – walking in a clockwise direction on a Kora (Pilgrim circuit). 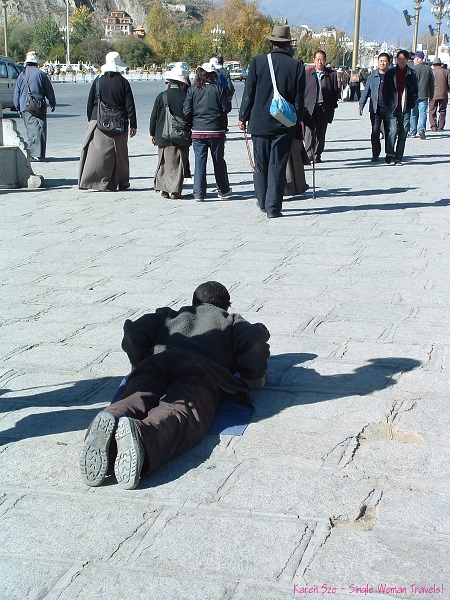 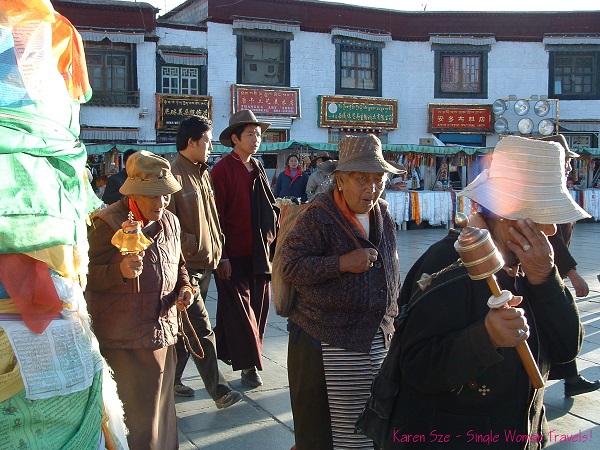 Tibetan Buddhism is rooted in self-sacrifice and compassion. Hundreds of thousands of pilgrims travel to Lhasa and the sacred Jokhang Temple each year, despite the departure of the 14th Dalai Lama from the Potala Palace back in 1959.

Most sacred temple in Tibet – Jokhang

At times, it felt like I walked into an energy bubble when I was surrounded by Tibetan Buddhists in prayer and prostration. Such peace. Such devotion.

Tibetan monks on a busy street

Dharma wheel and symbolic deer on top of Jokhang Temple

Tibetan horns are integral to traditional Tibetan music and ceremonies

On this journey, as we traveled to Shigatse, Gyantse, Sakya, Everest base camp and the Nepali border from Lhasa, we got to see how Tibetans lived and endured the past 50+ years without their spiritual leader inside the same country. Some monasteries had locked their doors as they thought the travel season has ended and did not expect travelers. Our tour guide searched for monks and banged on doors to gain entry.

I was glad I was able to admire and enjoy the peace found inside each monastery in silence – no other loud tour groups. I have to admit, I do not enjoy sharing space with tour groups from mainland China. They are typically loud, obnoxious and rude.

Inside each temple or monastery that we visited, I learned a little more about Tibetan Buddhism. I offered incense and money as a sign of respect – as taught by my mother since I was a child. If time allowed I would sit with my eyes closed – this was the time before I learned about meditation.

I learned to not sit with my feet pointed at Buddha nor point with a single finger – these are signs of disrespect. If trying to direct attention at one of the many statues, extend the hand with all fingers extended and together. Bowing upon entry to the great hall is always welcomed. 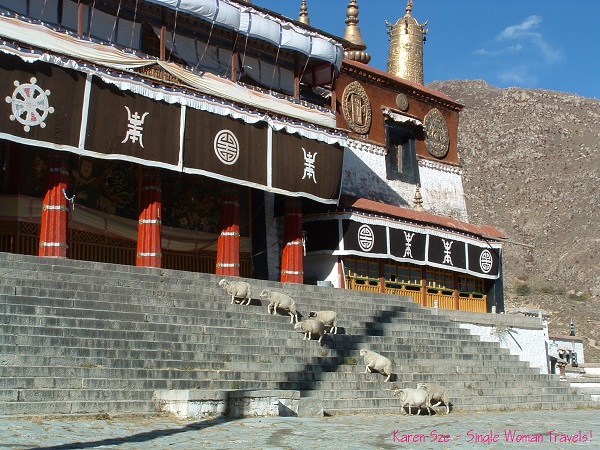 Sheeps on a Pilgrimage to a Tibetan monastery

Lhasa, a Buddhist sacred city honored with a long history, have attracted hundreds and thousands of tourists and pilgrims at home and abroad by its historic sites and scenic beauty. There are lots of monasteries in Lhasa. Almost around every monastery, there is a kora or pilgrim circuit in Lhasa. The Lhasa pilgrim circuits, particularly the Barkhor Pilgrim Circuit, are the ultimate pilgrimage destination for pilgrims.

The most famous pilgrim circuit in Lhasa is Barkhor Kora or Barkhor Pilgrim Circuit circling the ancient Jokhang Temple. On the Barkhor Street, you can see thousands of people with pray wheels, Buddhist prayer beads or incense walking clockwise around the Jokhang Temple. Follow this Lhasa  pilgrim circuit, you can get a feel for Tibetan arts, handicrafts, and customs. This kora is lined with traders selling everything, as well as small alleyways leading to temples, markets and homes. Therefore pilgrims can do shopping at the end of their kora. The Barkhor Street is always thronged with pilgrims from all over the Tibet, even other places of the world. Some of them have covered thousands of kilometers to complete this sacred circuit. Some of them, even teenagers, move forward body-lengths by body-lengths from morning to night. All they do is to testify their piety to their beliefs. It is here that you can witness the devotion of the pilgrims and directly feel the strength of religion.

Thousands of pilgrims with prayer wheels, Buddhist prayer beads and incense walking clockwise around the Potala. It was not just the old people, but people of all ages who do koras. The pilgrims who have come from afar prostrate themselves along the entire route. Once again, follow the kora and feel the mysteries of Tibet.   – See more at: http://www.tibettravel.org/tibet-travel-guide/lhasa-pilgrim-circuits.html#sthash.S0VVrwwJ.dpuf

8 thoughts on “Pilgrimage to Tibet”