During the spiritual portion of my 2013 Epic Journey, I traveled to the small town of Abadiânia, in the province of Goiás, Brazil. It is there where one can be in the presence of João Teixeira de Faria – John of God (João de Deus). He is known to be a medium and a psychic surgeon by channeling Entities.

I had no idea who he was 6 months prior, however when I mentioned to my Usui Reiki instructor of my intent to visit Brazil in 2013 – she insisted that I must pay him a visit. Of course I googled him and found out Oprah had interviewed him. So I decided to include it as part of my journey if time allowed.

I ended up staying in Abadiania for 13 days, met a bunch of like-minded, esoteric travelers from around the world and gained a Brazilian family. Fortunately, I also received permission from the Entities to be a guide for the Casa.

However, 2 days before my intended departure for Brasilia, I felt the onset of a fever, along with muscle and joint pains and a rash on parts of my body. My skin showed a bunch of pink dots but it was not itchy, just felt hot to the touch. I wasn’t sure what was wrong. At this point, my body had collected dozens of mosquito bites but that’s normal and expected as I had been traveling in South America for 3 full months. To this day, I have no idea exactly where I received the deciding bite.

I did not put two and two together. Also, I did not know that these are key symptoms of Dengue fever! Dengue is also known as the breakbone fever because some patients experience severely painful joints and muscle pains.

Just a few days prior, a fellow spiritual traveler from Sweden suffered from high fever, painful joints and similar rash. He had been in town for over a month by that point. Needless to say, he was bedridden for several days and I was relieved when his symptoms disappeared before his flight back home.

Oddly and luckily, I only had a mild fever and minor aches and pains which I related to symptoms of the flu. I’m from Canada after all. But if it was just a flu, the rash requires a different explanation.

My “Brazilian mother” was concerned and feared I had contracted Dengue fever when I mentioned my symptoms to her. She insisted that I visit the local medical clinic with her. Luckily she’s fluent in English and Portuguese (and several other languages)!!

The local clinic was basic but sufficient. A nurse at the intake desk. A long corridor with rooms on both sides. The doctor-on-call sat in the office at the end of the hallway. After filling out some paper work, my “mother” sat and waited with me. Coincidentally or not, there was a poster describing the typical symptoms of dengue fever on the wall.

The poster said all symptoms are to be present and I didn’t exhibit all the typical symptoms associated with Dengue fever – I only had 3. Though the easiest and fastest method to find out the truth was a simple blood test.

The principal symptoms of dengue are:

After a thorough talk with the doctor, I was given a blood test request form, acetaminophen, several packages of re-hydration salts and an on-the-spot IV drip for re-hydration. There is no cure for dengue fever, once contracted and the person survives, that body will create anti-bodies for that type of dengue fever. As the closest blood test facility was in the nearby city of Anapolis, which I had visited just a couple days earlier, I decided to not get it done.

I figured that I will confirm the suspicion when I return back to Canada. There was no point in stressing over the question – It is what it is. Whether or not I have dengue, I could not change it and there was nothing more for me to do. I did not want this to ruin the rest of my journey. 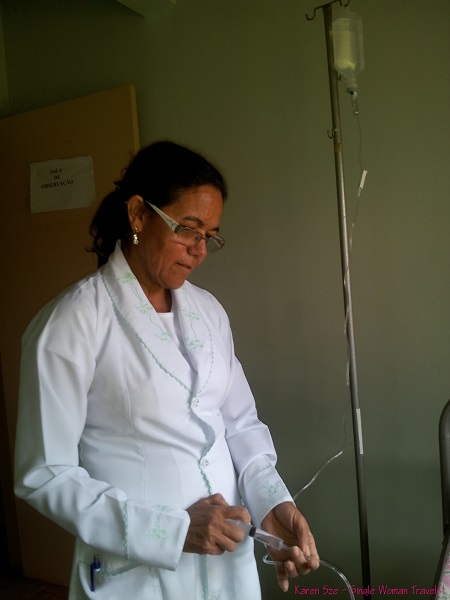 It wasn’t until we walked back to the car did I think that I should have brought proof of my travel insurance coverage or my wallet. I asked my “Brazilian mother” how much I owe her or the Brazilian health care system.

Her answer, “Zero dollars”!!!  My eyes bulged and my jaw dropped – I had no idea the medical system in Brazil is completely free, even for a visiting foreigner! How amazing pants is that!?!!

Brazil is home to a 2-tiered system: Public national health care – Sistema Único de Saúde (SUS) and the Private health care. The Brazilian government follows the motto – “Health for All”.

I am grateful I did not have to go through travel insurance claim hurdles because of this incident!

For the remainder of that day, I rested in preparation of my day trip to Brasilia and an overnight bus into Rio de Janeiro. Little did I know that my life would be changed on that bus ride.

Upon return to Toronto, Canada, I made an appointment with my family doctor. I asked her to test for dengue fever, parasites and other tropical diseases. The blood test came back and showed my blood now contains anti-bodies for one strain of dengue fever. Everything else was healthy and normal.

As I write this post, I miss the daily bowl of acai pudding which I savoured while staying in Abadiania!